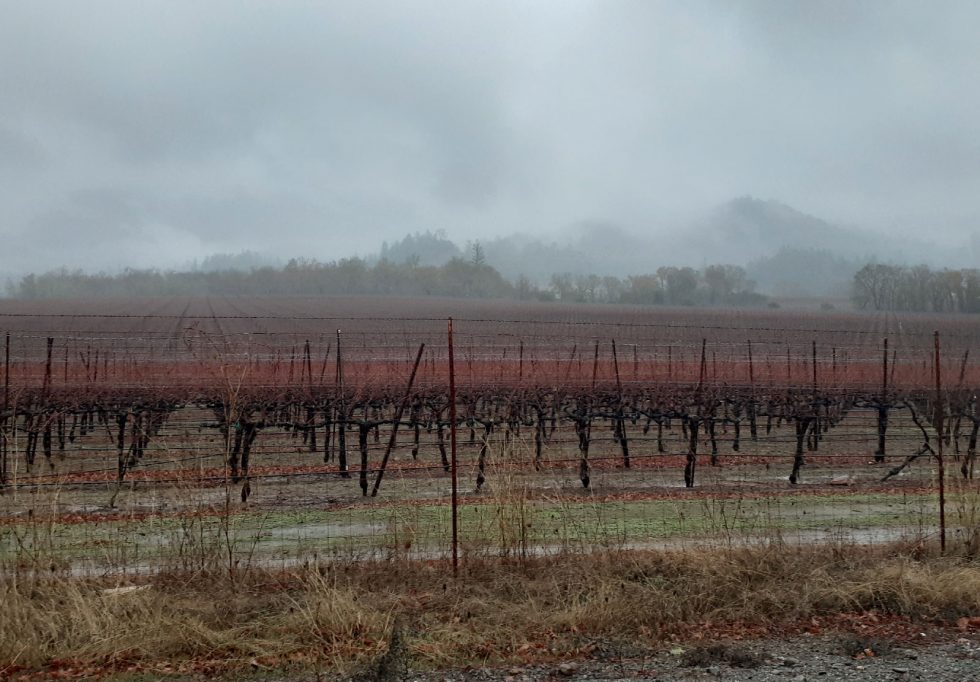 The northern end of the Napa Valley is pretty rural!  Most people think bougie glam when Napa comes to mind, but really, up here in Calistoga it’s mostly country roads and nature.  Vineyards of course  are plentiful, but they’re contrasted nicely by the volcanic mountain ridges that dominate the eastern skyline, and the soft rolling mountains in the west covered in oak and redwood trees.

I was driving along one of our country roads admiring the rocky cliffs above when I pass my uncle Larry’s property and notice he still has grapes on the vine.  Way past when he should!  But uncle Larry is by nature always doing something interesting:  probably invented the word eccentric for someone just like him I’m sure!  He makes some world class wine too, has a garage the size of Rhode Island with cars and parts strewn everywhere, raises three homeschooled teenagers who are always running wild somewhere on the property, and hosts, at last count, 10 dogs of various shape and size, (rescue mutts.)  To add to his mystique, late one night when we all drank way too many bottles of wine to count, he let slip that he helped prevent World War 3 with Russia when he was in the military during the 1980’s!  But now he’s all serious about the subject and won’t say another word.

Anyways- I was driving by his place, mid-January, and I noticed he still had an acre of grapes hanging on the vine!  I was like WHAT THE HECK IS HE UP TO?  Because no one else still has grapes out: the rest of the county harvested way back in October!  I set to thinking about it because I always like trying and figure him out!  So while I’m headed down his long ass gravel driveway I contemplate the possibilities.

Effect of Napa Valley Wildfires in 2017

The last time he had grapes out longer than he should was when a crazy wildfire rolled through here in 2017, Tubbs Fire, and the whole northern end of the Napa Valley got evacuated.  And as fate would have it, that was right toward the end of harvest and tons of big red grapes were still on the vine.  Then those grape’s sugars peaked and should’ve been harvested but nobody was around to do it, so those grapes ended up being sold for vinegar later in the year.  He lost two acres of wine grapes that year but he didn’t care, said that’s the natural way of a farmer!

But maybe this year his vines got phylloxera or another of the 50+ grapevine diseases?  When phylloxera or the other diseases hit, the grapes can still grow but the flavor isn’t worth a damn, and yields go way down so growers don’t even bother with the fruit.  The only solution is to replace the grapevines, crazy expensive.  Napa Valley alone has replaced over half its vines the past 30 years because those bugs are nasty.  I considered this option for Uncle Larry’s grapevines but their leaves never got too red and looked healthy all season, so I tried to think of another reason why he still had grapes on vine mid-January.

Dessert wine!  Of course!  He won’t be able to make ice wine because it doesn’t get cold enough here to hard-freeze those grapes into tiny raisins.  But dessert wine in Napa Valley is popular: vintners let the grapes stay on vine months longer than normal so the sugar levels skyrocket.  Then they harvest and ferment, and because there’s so much sugar winemakers have to stop fermentation at the right point so the alcohol level doesn’t get too high- and that means lots of sugar and sweetness left over to balance those nice firm acids- thus dessert wine!  Maybe he’s leaving his grapes out long enough so they might catch that Noble Rot, Botrytis fungus, which contributes amazing flavor to a dessert wine, and elevates the value of a wine ten fold.  (*see French Sauternes or Hungarian Tokaji)

Dessert wines also get special treatment when drinking and have very specific glassware to capture all the aromas and taste profiles.

Check out our selection of Dessert Wine Glasses

Napa Valley Cabernet is the Bomb!

So I ran out of time because the driveway ends, and I arrive at his modest country house which rests on a hill overlooking the property below.  And there he is chopping wood with an axe and dressed in an old tie-dye shirt.   He peeks up at who’s approaching and sees my truck then waves with a sideways grin.  I laugh because he’s a spontaneous guy and always has a trick up his sleeve.  I pull up and carefully hop out the truck,  greets me with a big hug.  We pull aside to chat and I can’t help asking, “So what’s up with grapes still dangling by the road Unc?”  He turns toward the direction they still hang and grins.  “Ol Pete contracts them now for surplus, but his harvest on his own property gave him more than he needed this year. Still paid me but said I should keep um!  So I’m gonna try my hand at making some Madeira!  Wanna help?”  I smack palm to forehead!  Maybe Port but Madeira??  It’s basically a fortified wine like port but literally gets seasoned to age like it would on a “ship voyage across the Atlantic 500 years ago!” It’s called the estufagem process: basically hot and cold again and again until full on wine abuse!  In the old country of southern Europe families keep barrels of Madeira in their house attics for decades and decades to properly age it!  Of course uncle Larry is gonna try to make some, it’s the weirdest wine of them all!  He grins a familial kindness at me and says, “Hey, it’s after noon somewhere right?  Whatchyu say we go downstairs- just bottled the 2016 Cab??”  I sure like that idea and nod, follow him into that infamous wine cellar and he hands me a Riedel glass, and now I’m smiling sideways because “tasting” with uncle Larry means only one thing!  I’m about to get straight up Cabernet bombed!